Surveys are a regular part of mobile app product management. But if your response rates are dipping lower and lower, a condition called “survey fatigue” might be the cause. Why aren’t your users answering your surveys—is it because they’re tired of your surveys, as the name suggests? Don’t worry; this condition is reversible. In this blog, we’ll learn about survey fatigue, how it happens, and how you can prevent your users from getting it.

What is survey fatigue?

Just from the name, you might have an idea of what “survey fatigue” could mean. Users suffering from survey fatigue are either tired or bored of taking app surveys. They’re not people who have always been disinterested in them; they just need a break. Generally, this happens because they’ve done too many surveys recently, or the last one really wore them out.

Their fatigue may have little to nothing to do with your company or app, as surveys are commonplace and people are bombarded with numerous survey requests on a daily basis—on the internet, in their email inboxes, on their phones, or even on receipts. Everyone wants user feedback, and the volume of the collective survey requests from all the brands you know can get exhausting, fast. Many people have learned to start ignoring surveys altogether.

Product managers can sometimes push a little too hard for user feedback, but only because they’re highly motivated to capture as many user insights as possible. They’re doing their best to improve apps, and you need users to validate your ideas to do that. To maximize the amount of useful data we receive from surveys, we’ll have to balance the volume of our feedback requests with our users’ tolerance for surveys. And to encourage more participation, we’ll need to show users that their participation is valuable—and that we respect their time.

So how do we manage that? First, let’s take a look at the different types of survey fatigue and their triggers.

Survey response fatigue occurs when a user opts out of the survey before it begins. This typically happens because they’re overwhelmed by how many surveys they’ve been taking lately, or the survey request is interrupting their flow.

Survey taking fatigue is what happens when a user starts a survey but abandons it before completion. This usually happens when the survey is too long or the user realizes the questions are not relevant to their experience.

Why do we care about survey fatigue?

Why do we care about this issue? What can happen as a result?

Survey fatigue drains your resources. Low response rates are a poor return on the money you spend developing and deploying your surveys. If you want to decrease these costs from the get-go, you can use an in-app survey tool like Instabug to save resources—you won’t need your team to devote resources to building a native survey engine. Instabug surveys are easy to customize and deploy, and they don’t require any code changes, so you can ship them yourself at any time.

When your fatigued users tap out, that leaves only the most devoted users who are willing to stick with the survey and finish it up. When your audience self-selects, you’ll end up with what’s called a “non-response bias.” This means the only responses you’ll get could be seriously skewed because they only come from a particular group of users.

The longer your survey goes on, the less and less effort your users will put into their answers. Surveys that last over 5 minutes statistically garner lower-quality, less reliable data, and 5 minutes feels even longer when you’re looking at a mobile screen.

Your brand perception can also be affected by sending too many surveys. If your app annoys your users with too many survey invitations, they’ll begin to develop a negative view of your brand.

Use the right medium to deploy your surveys. If you ship your surveys in your app rather than redirect them to an external site or email questionnaire, you’ll keep them in-app, engaged, and comfortable. Focus on mobile design or native experience is a must—a seamless survey interface presents less of an interruption to your users and is faster and easier for them to complete. A smooth, appealing interface will keep your users engaged. Instabug is a great way to make that happen without sinking your developers’ resources into building survey features.

Target your audience properly to ensure relevance to your survey content. With Instabug, you can tag users by attributes or create custom tag groups. Custom tags are easy to create with Instabug. You don’t want to send users a survey about a feature they don’t use, right? So to reduce survey drop off, keep your users organized and segmented. Personalization will increase response and completion rates from your users.

Clarify expectations before the start of their survey. Especially for first-time survey recipients, a welcome message can be a great move for surveys. Instabug has an optional and customizable survey welcome message. You can add a brief note about why they’re taking the survey, about how long it will take, or whether or not you intend to share their data. Be sure to communicate the value of their participation. A quick introduction can increase their inclination to follow through with the survey.

Once they’ve started, one way to manage expectations and keep them engaged is to show them their survey progress—how many questions they’ve completed and how many remain. Your users are less likely to drop off if they know how close they are to the end. 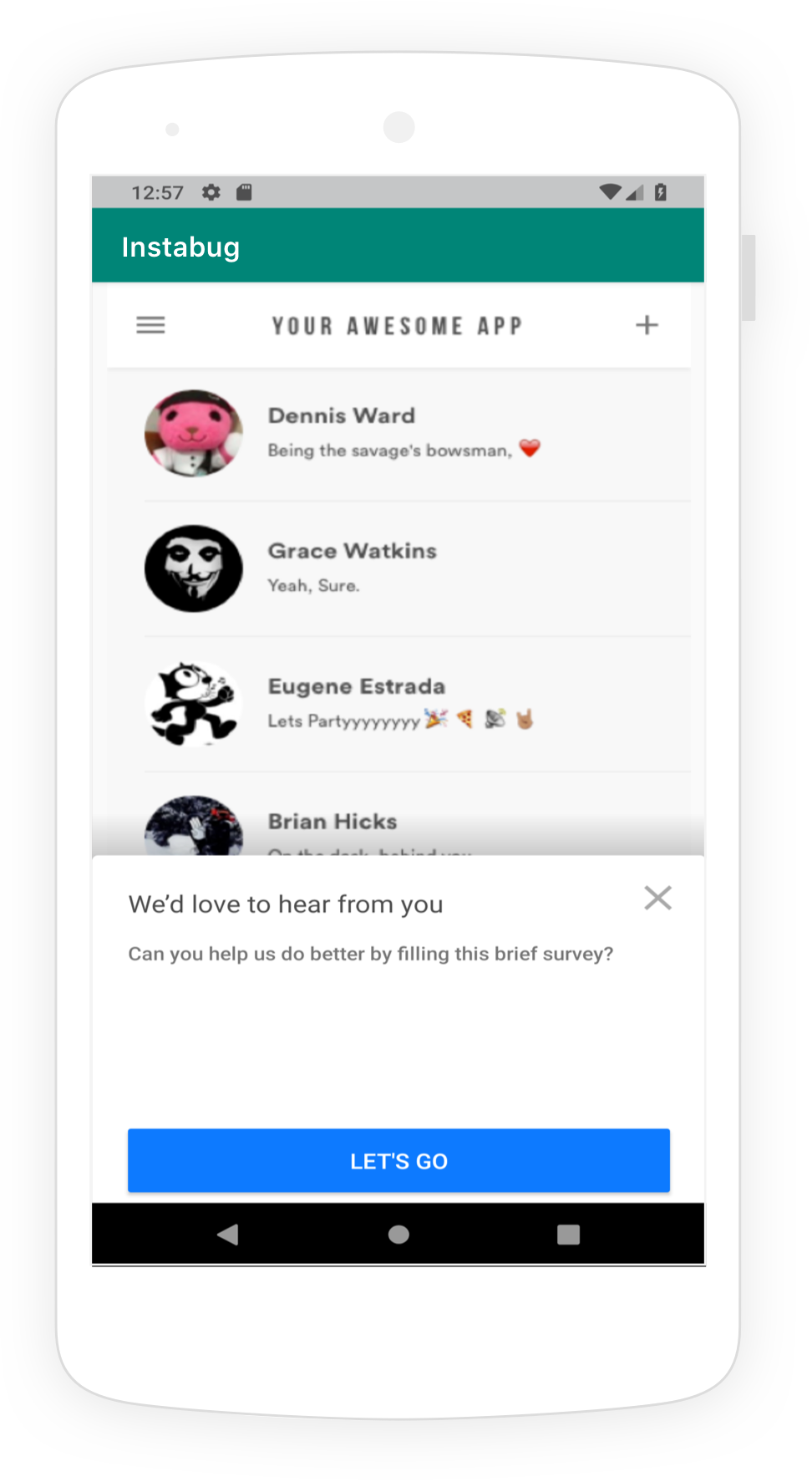 Keep your surveys brief and concise by limiting the number of questions. For example, 20 questions in a row could end up being overwhelming or feel never-ending, especially on a mobile phone. You want to get detailed answers, but your users’ patience limits the number of answers they can give you in one session. Ask questions with clear intent and limit open-ended questions to a necessary minimum (the perfect amount for your app will depend on your audience, their preferences, and how often you already survey them). Try separating questions by topic and address only one main topic or theme per survey.

Make sure your survey doesn’t take too long to complete. Are your questions complex? Are they all open-ended? If your survey is only 5 questions long, but each one requires them to sit and think and then type out a long response on their phones, your survey might need to be cut down. Try testing it on a few volunteers to see how long it really takes.

How often will you survey your users? Are they in a beta group or is your app in production? Beta users will expect to be surveyed more frequently, whereas it’s less of an expectation from live users. Be sure to coordinate with other departments on your team that may also be releasing surveys. Ensure at the very least 3 days between your last survey and the next. This will prevent your users from feeling bombarded with survey requests.

In order to show your appreciation and encourage participation in the next survey, set up a thank you message to display at the end of your survey. You can also reach out to each individual survey respondent using Instabug’s in-app chat feature. Simply go to your survey results page and look for the “start a chat” button to the right of each user’s response. Proactive (yet relevant) communication with users assures them that you’re listening and you value their opinions and care about improving their experience. You can also reply to old conversations with new updates when applicable. 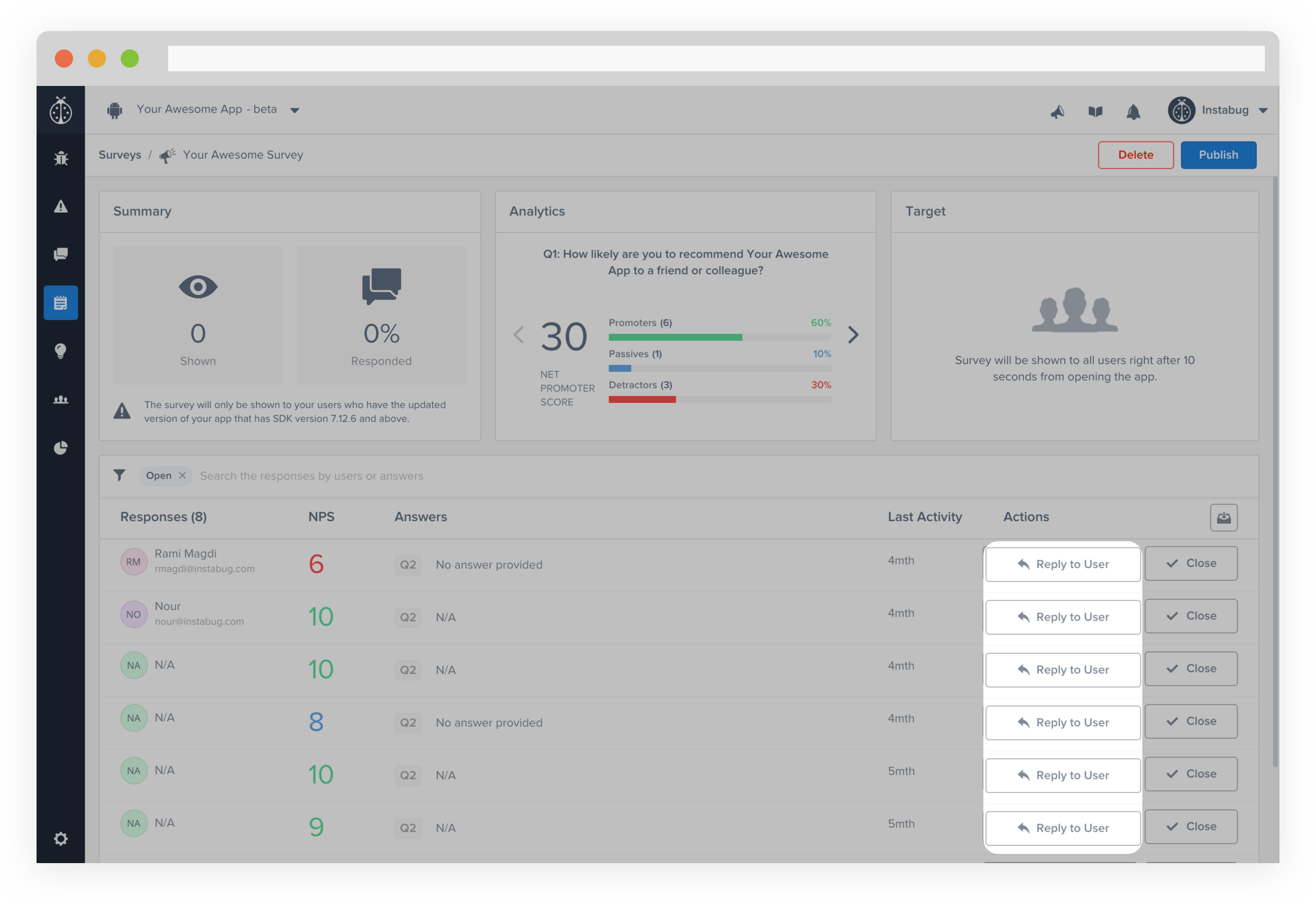 Always deliver a straightforward survey with questions that are easy to understand and relevant to the user. If they come to expect your surveys to be confusing, irrelevant, or otherwise pointless for them, they’ll be less likely to give your surveys a chance later. But if you follow the principles of successful survey design, you can maximize your response rate and the quality of your data.

Instabug empowers mobile teams to accelerate their workflows and release with confidence through Real-Time Contextual Insights across the entire app lifecycle.

The Beginner’s Guide to In-App Surveys for User Feedback
November 30, 2020

Survey Sins: The Survey Design Mistakes You Want to Avoid at all Costs
September 2, 2020

How to Share User Feedback With Decision Makers
July 5, 2020

Our customizable SDK requires just one minute to integrate.

Get Started for Free
Search
Go to Top